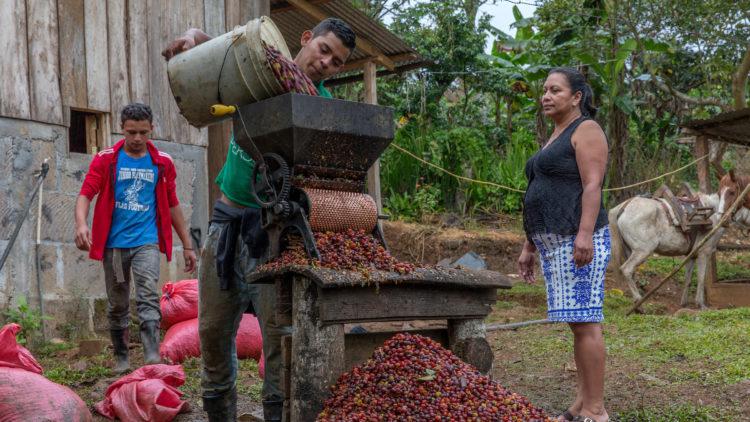 Perkee coffee beans are grown in Jinotega, a north central region of Nicaragua.

Coffee was brought to Nicaragua at the end of the 18th century by Catholic Missionaries. It wasn’t until half a century later that it started to gain economic significance due to an increasing demand for coffee from increasingly sophisticated customers.

Coffee production required significant capital and manpower. Laws were passed to encourage foreign investment and allow easy acquisition of land. By the end of the 19th century, profits from coffee production flowed abroad or to the small number of domestic landowners. Taxes on coffee were virtually nonexistent. The economy was also subject to fluctuations in the price of coffee on the world markets — which meant boom or bust years in Nicaragua.

The coffee industry really started to spark during the early 20th century when the first cooperative was formed and the dictator Somoza also promoted the industry. Nowadays the coffee business is increasing exponentially with the help of Fairtrade.

One of the reasons Nicaragua is a great destination for coffee roasters around the world is because of the coffee’s complex and fruit-like flavours. The region of Jinotega where the Soppexcca cooperative grows, our single origin Perkee bean is 3,600ft above sea level. The area has a rich volcanic soil, a humid tropical forest climate, and lush vegetation, including a great variety of lichens, moss, ferns, and orchids. The rainy season begins in May and ends sometime in December. Soppexcca grow different Arabica coffee tree varieties including Bourbon and Caturra.  Coffee cherries are generally harvested from December to March and it is a wet process. This means the fruit covering the seeds and beans is removed before they are dried.

The Perkee coffee bean when roasted and just before its second crack, releases a very pleasant dark chocolate flavour eased with caramel notes and a complex acidity.